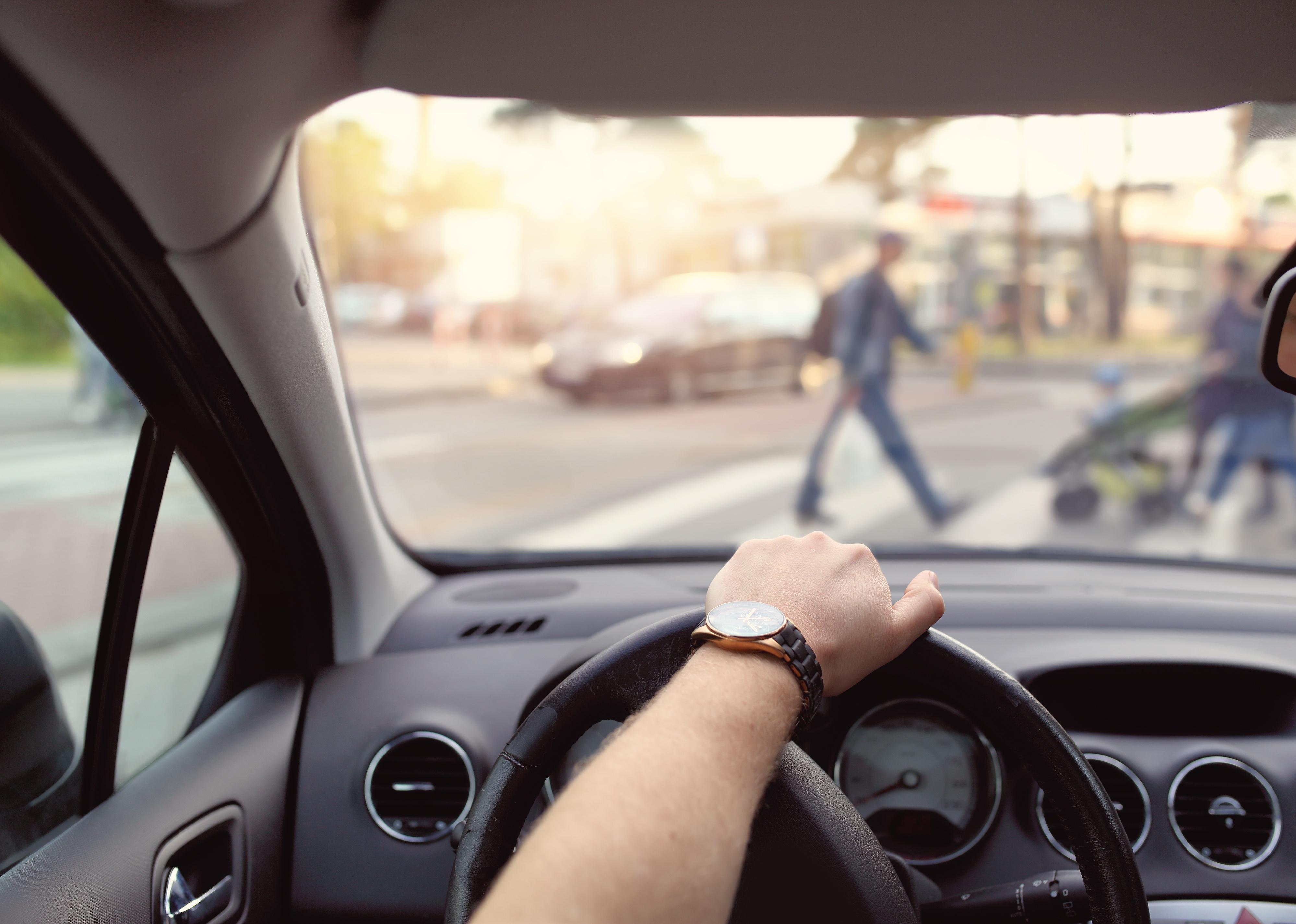 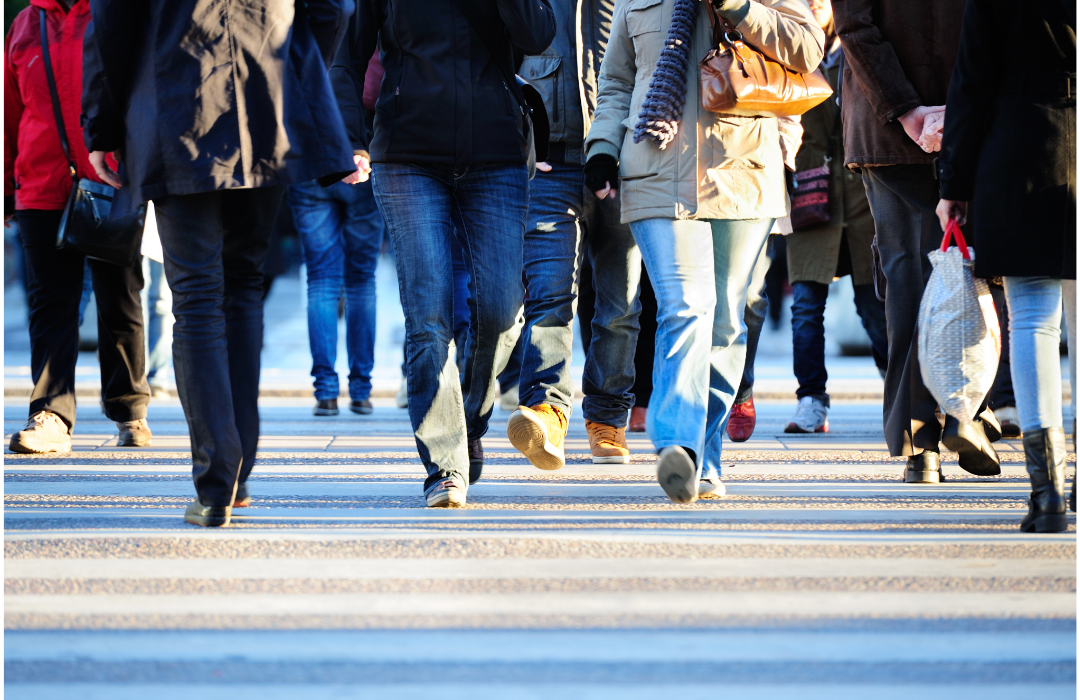 Most people are pedestrians at some point, even if they don't live in a city where car ownership isn't necessary. From the country's sprawling suburbs to the most rural locales, you can find people strolling on sidewalks and crossing parking lots, children walking to school or heading to friends' homes, and joggers out for a run.

In 2020, 6,516 pedestrians died in the U.S., and an estimated 55,000 more were injured; a pedestrian was killed in a traffic crash every 81 minutes on average. While incidents since 2019 involving firearms have become the leading cause of death among children in the U.S., for the preceding 20 years, motor vehicle crashes led by a significant margin. However, in traffic collisions where children are pedestrians, the death rate is lower than for other age groups.

In all, pedestrian fatalities resulting from traffic collisions have risen 59% since 2009 and now account for 17% of all crash-related fatalities. This alarming fact leaves no state unscathed, but some states are deadlier than others. Using data from the National Highway Traffic Safety Association, Elk and Elk Co. ranked the most deadly states for pedestrians from vehicle crashes in 2020. The fatality rate per 100,000 people determined state rankings. 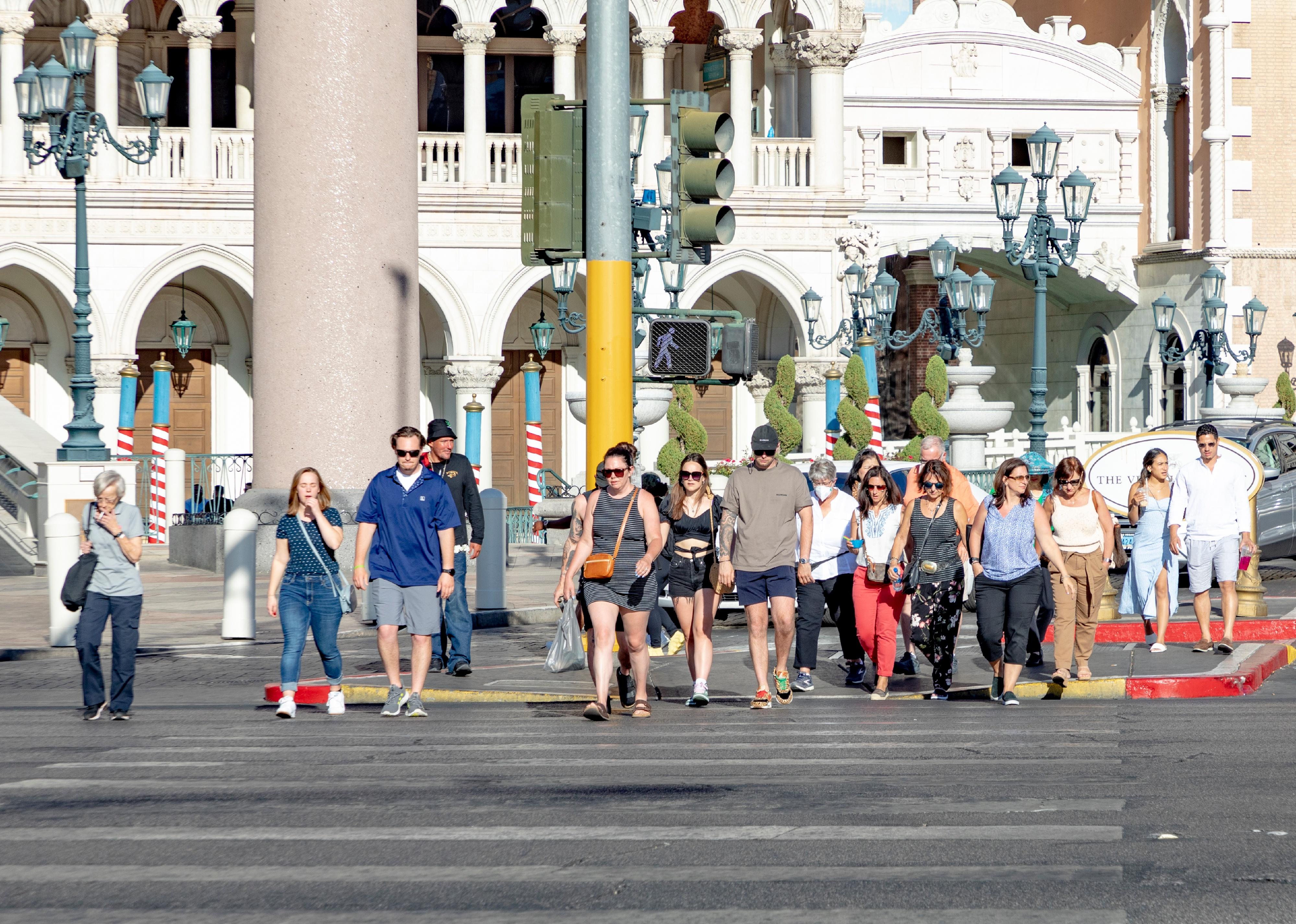 - Pedestrian fatality rate per 100K population: 2.52
- 24.9% of all traffic fatalities were pedestrians

In August 2022, Las Vegas introduced its Vision Zero initiative, which aims to develop strategies that will put an end to all severe injuries and fatalities on roadways in Las Vegas by 2050. In the immediate wake of the initiative's launch, members of the public were welcomed to provide feedback via a Vision Zero survey, which helped frame the initiative's action plan. Several groups will be working together on Vision Zero, including the Regional Transportation Commission of Southern Nevada, local law enforcement, the city of Las Vegas, and other groups.

City officials have described this initiative as an international strategy for eliminating severe injuries and traffic fatalities while increasing everyone's equitable, healthy, and safe mobility. Vision Zero is based on a program used in Sweden in the 1990s to resounding success. Similar efforts have been launched in more than 45 U.S. cities. 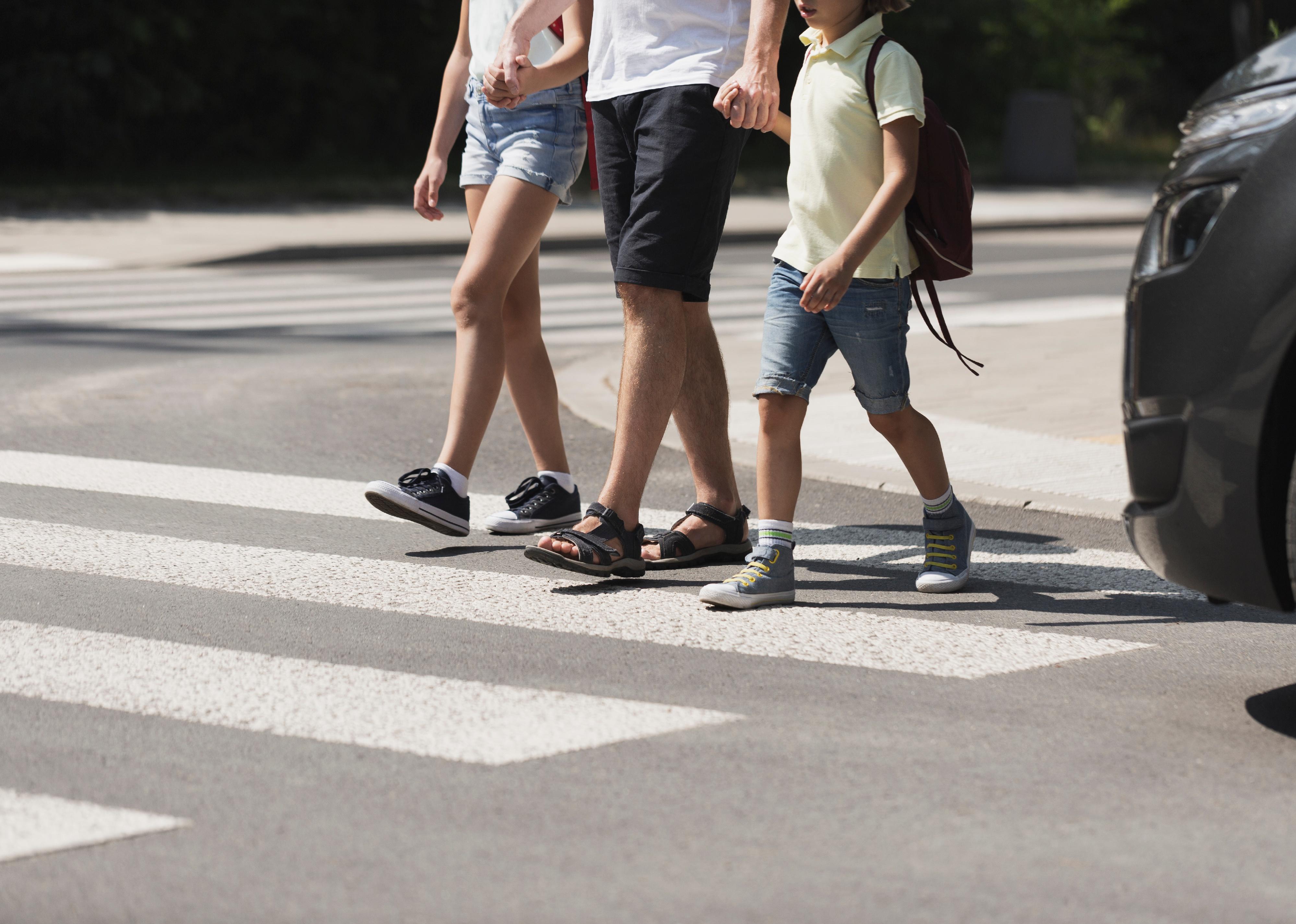 - Pedestrian fatality rate per 100K population: 2.53
- 21.6% of all traffic fatalities were pedestrians

Several communities in Delaware have begun instituting roadway safety measures in conjunction with the state's Strategic Highway Safety Plan. For example, Rehoboth Beach announced in September 2022 pedestrian safety improvements it would install over the next few months. The upgrades include well-marked crosswalks, "bump-out" curbs that would shorten the distance required for crossing the street, and flashing beacons alerting drivers when pedestrians enter the crosswalk.

A large-scale safety program along Delaware's State Route 1 corridor—also part of the SHSP—involves a pavement rehabilitation project in Dewey Beach and pedestrian improvements such as continuous roadway lighting in South Bethany and Bethany Beach. 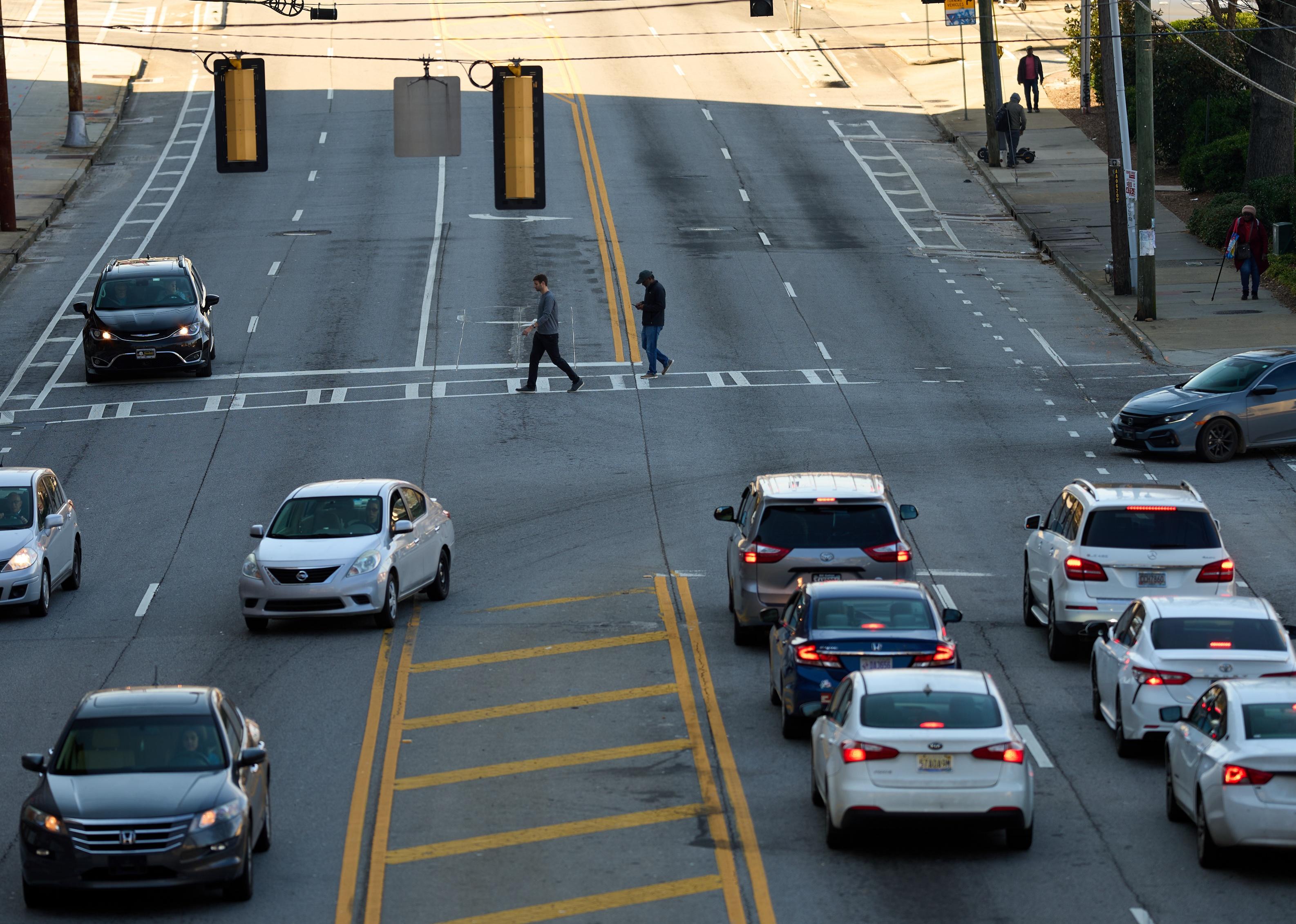 - Pedestrian fatality rate per 100K population: 2.61
- 16.8% of all traffic fatalities were pedestrians

The city of Atlanta has introduced a regional action plan, Safe Streets for Walking & Bicycling, to lower traffic fatalities within the metropolitan area. It supplements the Atlanta Regional Commission's 2016 program Walk, Bike, Thrive!, which aims to make the Atlanta region one of the safest and most connected area in the U.S. for bicycling and walking.

The Safe Streets program is a proactive, data-driven regional approach to the elimination of severe injury and fatal crashes that will be enacted in a four-pronged plan: setting the target of zero fatalities by 2030 and embracing a safe system procedure; identifying policy priorities, demand and risk, and evidence-based countermeasures to eliminate those risks; creating short-, medium-, and long-term strategies for action; and advocating for data collection that supports improved crash analysis. 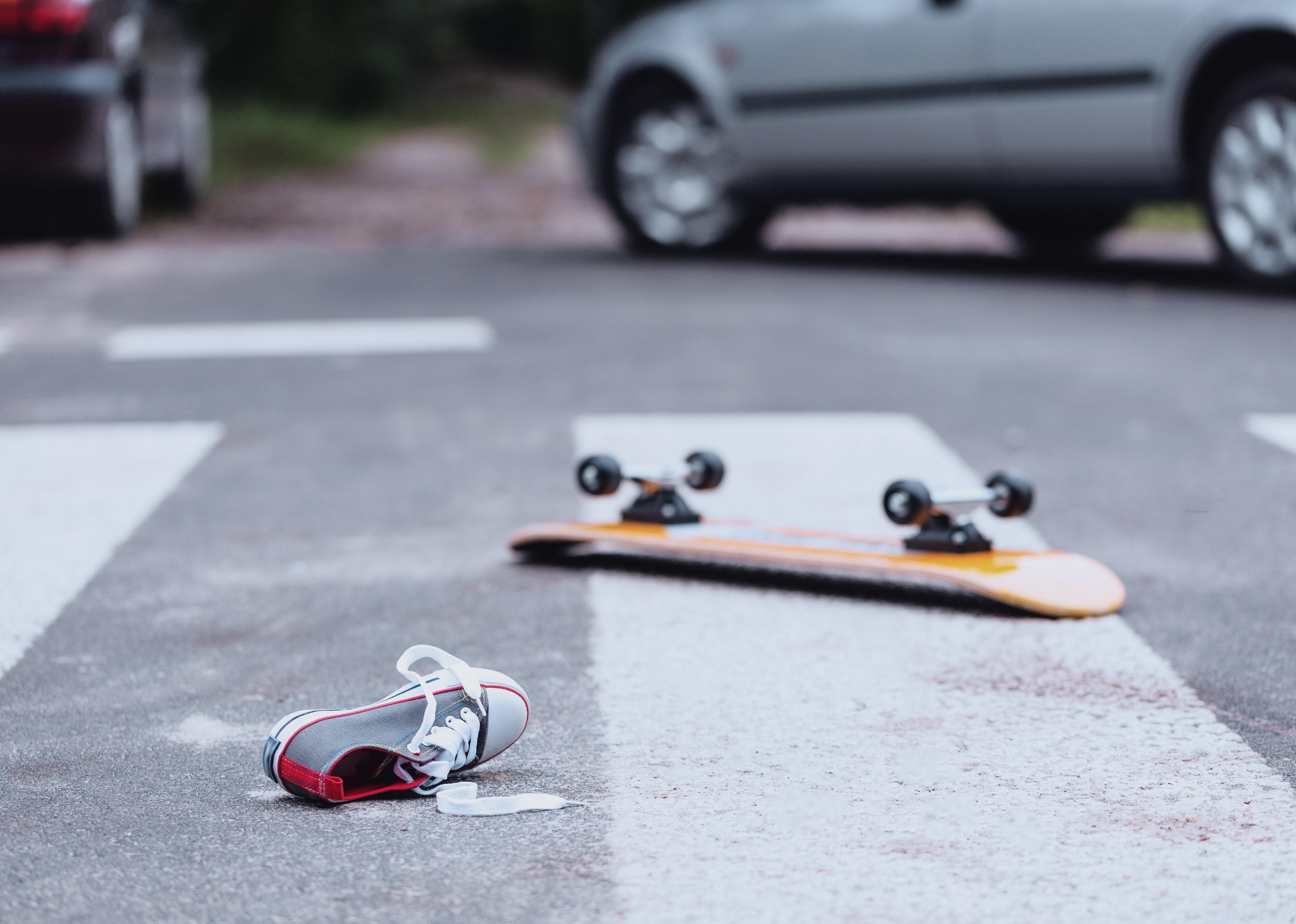 - Pedestrian fatality rate per 100K population: 2.67
- 12.7% of all traffic fatalities were pedestrians

On July 18, 2022, law enforcement officers in Arkansas banded together across the state to participate in a "Obey the Sign or Pay the Fine" operation. Lasting two weeks, the crackdown targeted speeders to lower the risk of roadway deaths and injuries. This operation is just part of the state's Toward Zero Deaths program, which, like Vision Zero, aims to boost awareness of roadway safety and reduce the number of fatalities to nil.

State capitol Little Rock initiated the Friendly Driver Program in October 2018, an educational program designed to improve safety in the city for pedestrians, cyclists, and drivers. The idea behind the program is that drivers need to know how to drive in the presence of new infrastructure safety types such as pedestrian hybrid beacons, bike lanes, and other facilities designed to keep cyclists and pedestrians safe. Because these types of infrastructure weren't around 20 years ago, many drivers need to learn how to drive near them. The Friendly Driver Program is a two-hour, free course available to anyone—and those who take it will leave the class as a Little Rock-certified Friendly Driver. 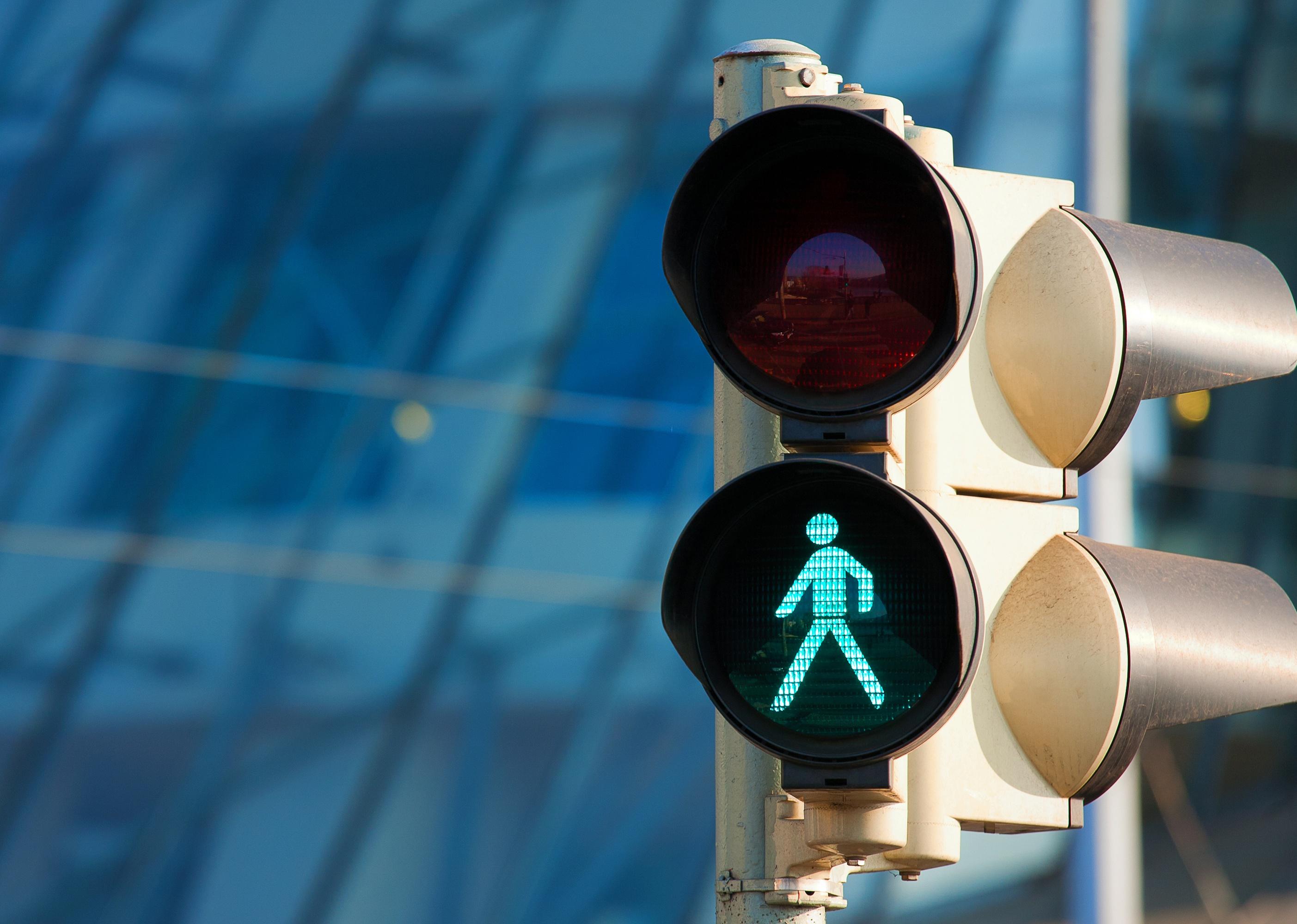 - Pedestrian fatality rate per 100K population: 2.99
- 21.1% of all traffic fatalities were pedestrians

Like Las Vegas, Phoenix has also gotten involved in a Vision Zero initiative—quite recently, in fact. The Phoenix City Council unanimously approved the measure on Sept. 7, 2022, to the tune of $10 million. This plan aims to eliminate serious injuries and fatalities by 2050 via a data-driven decision-making process for identifying and prioritizing safety improvements in transportation using 41 actionable strategies.

In another effort to make the city safer for pedestrians, Phoenix installed HAWK pedestrian signals, which pedestrians can activate before crossing busy intersections and mid-block locations. The beacons' red-yellow-red flash pattern alerts drivers of the presence of pedestrians and signals them to yield the right of way. - Pedestrian fatality rate per 100K population: 3.10
- 17.4% of all traffic fatalities were pedestrians

Between 2020 and 2021, pedestrian fatalities rose by 27% to 185 deaths in Louisiana, the highest number ever recorded in the state. The major causes of roadway injuries and deaths in Louisiana are aggressive driving, impaired driving, and distracted driving. Despite fewer traffic numbers during the early onset of the COVID-19 pandemic, aggressive driving was on the rise nationwide as more high-risk drivers were out on the road, a pattern that bore a direct effect on the number of pedestrians killed in Louisiana, particularly in densely car-centric metros like East Baton Rouge Parish. 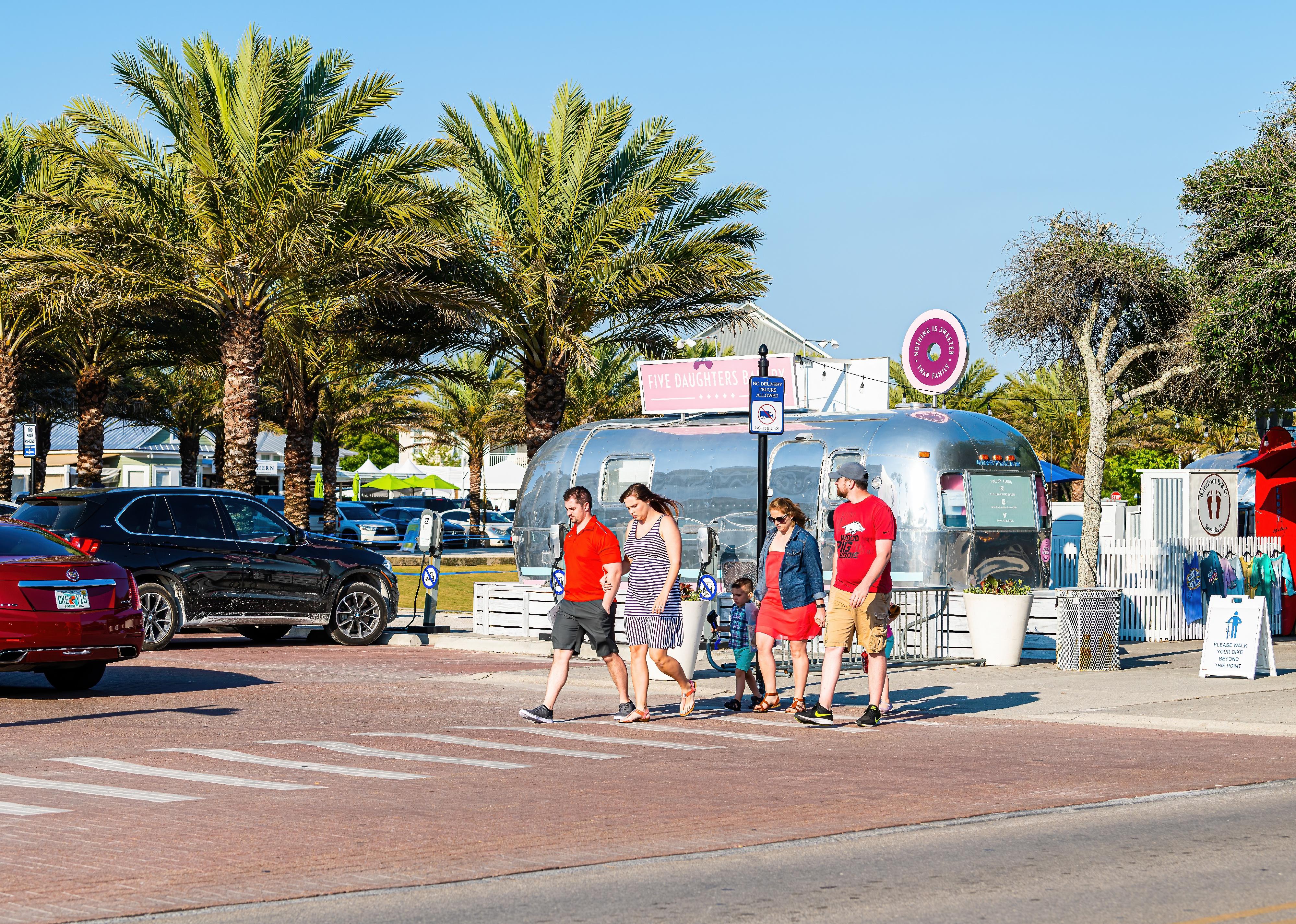 - Pedestrian fatality rate per 100K population: 3.20
- 20.9% of all traffic fatalities were pedestrians

Florida has a five-year implementation plan, the Pedestrian and Bicycle Strategic Safety Plan, which aims to drive down the number of traffic crashes resulting in severe or fatal injuries to bicyclists and pedestrians. This mission is accomplished through strategic allocation of resources, data-driven investments, and goal-oriented decision-making. The plan focuses on the 25 counties in Florida with the highest proportion of traffic crashes that result in bicyclist and pedestrian fatalities and serious injuries. 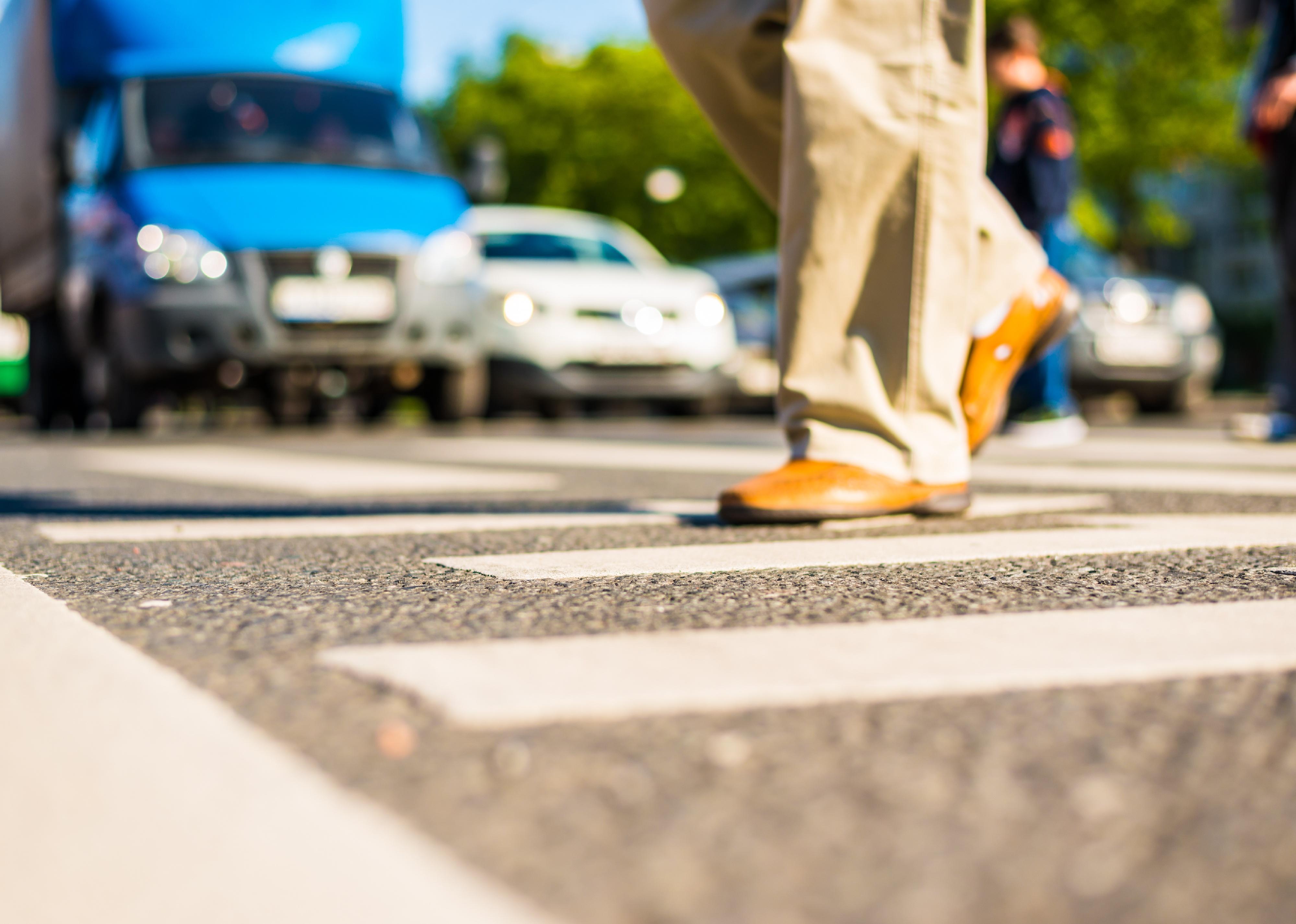 - Pedestrian fatality rate per 100K population: 3.57
- 14.1% of all traffic fatalities were pedestrians

Sun Belt states and cities—including Mississippi—are the most dangerous locations for pedestrians, a 2022 report from Smart Growth America found. Smart Growth America Director of Transportation Beth Osborne explained to Smart Cities Dive that this is due to Sun Belt metros having been developed after car ownership was already widespread.  They were designed at a scale for car driving, with the next priority in development having been high-speed car travel. Jackson had one of the 25 most dangerous metros for pedestrians in Smart Growth America's most recent report, which also found that the fatality rate since the onset of the pandemic has been trending higher than reported from 2016-2019.

The Mississippi Department of Transportation sponsors education programs for school children and their parents to raise awareness of pedestrian roadway hazards. The state also launched a "Look Up and Look Out" safety campaign in 2020. 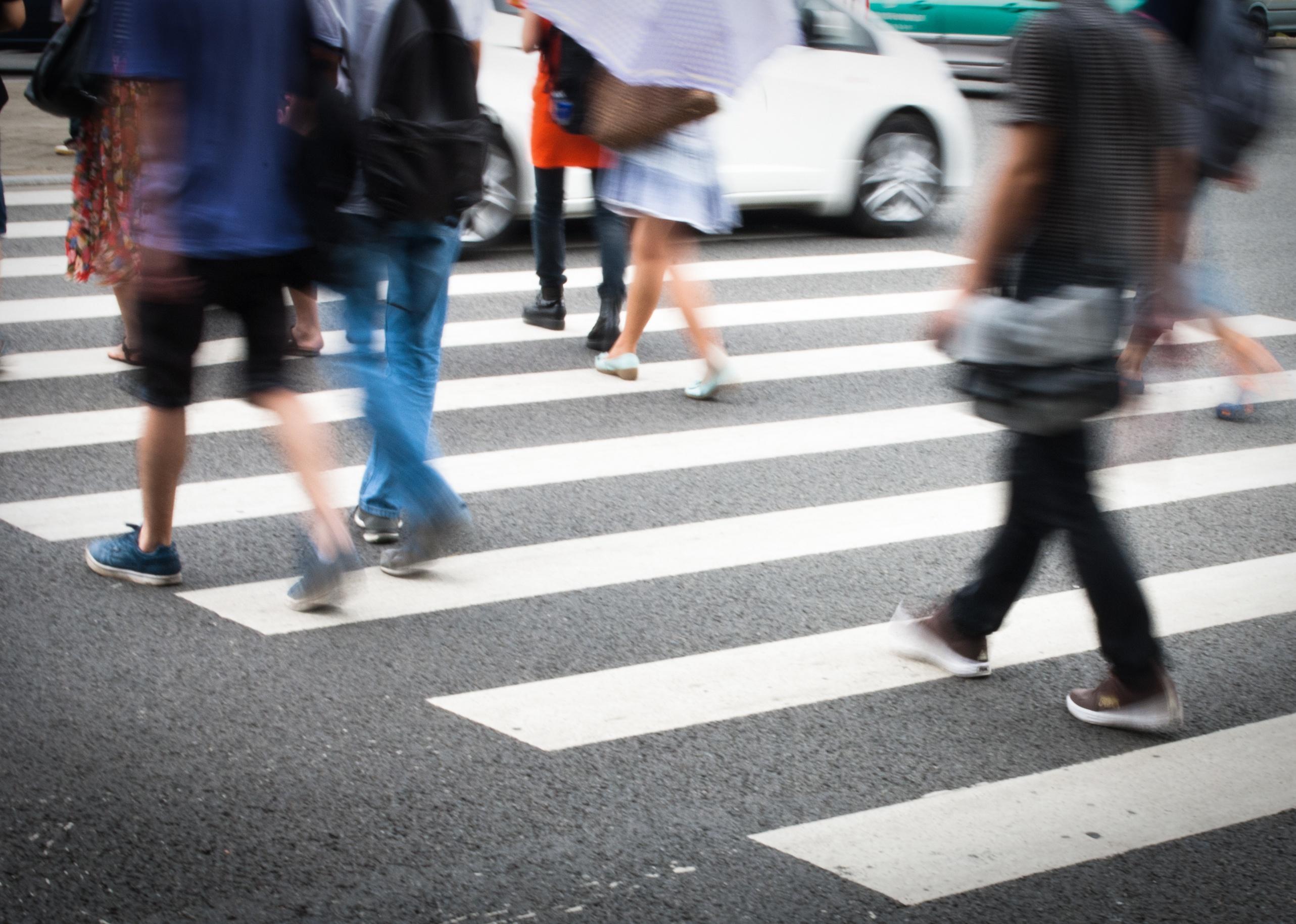 - Pedestrian fatality rate per 100K population: 3.58
- 17.6% of all traffic fatalities were pedestrians

In October 2021, Chapel Hill rolled out its Vision Zero initiative to get zero serious traffic injuries and deaths by 2031. The town is also participating in other safety programs such as the Staff Bike-Ped Team, which addresses community members' concerns regarding safety, and "Watch for Me NC," which provides police with extra training in pedestrian and bike laws.

Additionally, the town has increased safety enforcement due to pedestrian and bicycle crashes in Chapel Hill between Dec. 31, 2021, and Feb. 1, 2022. It has also added curb-running bike lanes, flashing beacons, and solid white lines.

- Pedestrian fatality rate per 100K population: 3.75
- 19.8% of all traffic fatalities were pedestrians

Like other cities, Albuquerque has committed to Vision Zero. The city's plan involves several steps toward safer roads, focusing on building or redesigning complete streets, automated speed enforcement programs, and a prioritization strategy that drives resources to the city's top 10 high fatal and injury network corridors and intersections.

This story originally appeared on Elk and Elk Co. and was produced and distributed in partnership with Stacker Studio.

Rediscover Christmas with radio play this weekend
In 1950, the Forgotten Coast was experiencing America’s “Forgotten War” in Korea, and several young men went off to fight in a bitterly cold country half a planet away. Back on …